These last couple of weeks, I’ve felt a whirlwind of emotions. A dab of homesickness, a splash of not feeling good enough, a sprinkle of self-doubt, a twinge of disappointment. Basically, the recipe for a quitter.

West Virginia left me feeling really pressured to just do better, be better. I left feeling like maybe this lifestyle isn’t meant for me after all. Even though I really want it to be. I considered even looking for other journalism jobs online and giving that 9-5 desk job a try after all.

A lot of that pressure stemmed from not being able to hook a fish in West Virginia, especially after watching everyone around me catch fish. It also came from feeling like I was a burden to Rob. Every time I try something new or have a problem, he has to take time away from fishing/editing to guide me or help me. I found myself feeling really out of place and unable to accept my small failures as what they were.

I needed Kentucky to be different.

Our first (and only) day of fishing was a hard one. Chase, our guide for the day, had recommended Elkhorn Creek as a great spot to float and catch Smallmouth bass. Our last creek float, in West Virginia, I got skunked. Between the mini-rapids and fast moving water, casting and landing a fish wasn’t easy.

But Kentucky was different.

I went into the float more determined and more confident than the last one, knowing that I was capable of keeping up and catching a fish. I think it helped that Chase wasn’t super experienced with kayaking and I felt like we were equal and in this challenge together.

By the days end, Rob had caught a handful, Chase had caught one or two and I hadn’t caught any. Seven hours and I had hooked up once, but I really don’t count it because Rob cast for me.

A couple days prior, when we were leaving WV, I had mentioned that I didn’t catch a fish in the state. And Rob responded that if I had just been persistent and not given up when it got hard, I probably would have caught one.

Going into this float, I made sure that I got the filming done early so I could focus all of my time and attention on catching a fish. I was determined. As the take out came into view, I was feeling really discouraged (and super hungry) so I put my rod down and decided to just call it quits for the day. Ordinarily, I would accept the failure as it was and sulk for the rest of the day. But instead, I picked up the rod and paddled over to the other side of the creek where I threw a few more casts and finally hooked up on a very small Smallmouth bass. I got it to the kayak, lifted it out of the water and it immediately fell of the hook.

I was angry, swore a handful of times but felt motivated because at this point, I had hooked into a fish on my own. Why couldn’t I do it again? The sun was setting but my adrenaline was high as I made my way under the bridge. At this point, I could see the truck and I knew I was running out of time but I kept pushing and finally landed a Largemouth, and the second largest fish of the day. 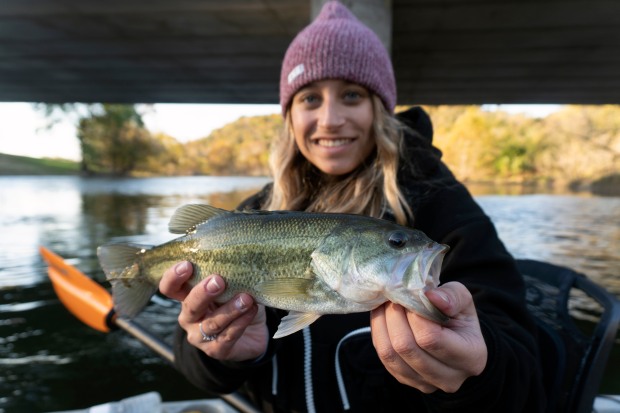 I have never been more proud of myself. Not when I conquered my anxiety. Not when I flew alone for the first time. Not when I graduated college. This. This moment right here is where I found myself being over-the-moon excited for myself. Because I persisted. I kept going. I didn’t give up even though it would be the easier option. I didn’t accept my defeat. I just felt like I earned this. There truthfully wasn’t a second in the day when I stopped fishing. Maybe here and there to drink some water or take a bite of my granola bar but even when I was chewing, I threw my line out. I stayed patient, I stayed persistent, I stayed focused and I persevered.

Such a little accomplishment but it meant so damn much to me. My mom always told me that I am the self-satisfying type of person. Even when I graduated college, everyone made such a fuss over it and I sat there thinking to myself, “this really isn’t a big deal.” I did what I was supposed to do, I went to school, I got my degree in four years and I did it by 22. But then what? I have a piece of paper saying I did something? That wasn’t enough for me. Feeling like my hard work paid off, like it did with this Largemouth, was enough. A feeling I will never forget and the most rewarding fish I have ever caught (for now).

Such a good lesson in not giving up. One more cast, one more paddle, one more bait. You  never know what the next fallen tree has hiding underneath its branches.

i met my soulmate today, 200 likes and i’ll bring her home w me
things i miss: 🇮🇹
beginning of the night vs the end of the night - lucky to love you #doublepost ❣️
good night, better company ♥️ happy 21st T, glad i could celebrate with you! 🤗 #family
two types of girls...
it’s her birthday so naturally she wanted to spend the day shopping but we’d much rather be back in the home land 🇮🇹 a whole day with you and not a single argument! we’re getting better with age - love you to the moon 🌙 ♥️🤗

Analyzing the social construct of timing based on personal thoughts and experiences.

Coming Out Part 3: Telling My Family

For the final post of my mini series, I discuss coming out to my family, among their various responses and my fears.

Coming Out Part 2: How I Knew and Dating Women

Part two of this mini-series covers how I knew I liked girls, my first real experience with the online “lesbian dating scene” and meeting her.

Coming Out Part 1: When I Knew I Liked Girls

At the end of the day, we as humans just want to be accepted as ourselves. This goes for all nationalities, all races, all religions, all sexualities, all genders. We just want acceptance.  I don’t see myself as an influencer but as a member of the LGBTQ+ community, I do feel a sense of responsibility […]

After being personally questioned, attacked and victimized for gaffing and killing fish, I decided to debunk the fiction from the fact in this opinionated, debate-oriented post about netting fish and catch and release.